These little pies are so delicious. The combination almond meal and honey in the crust give it a graham cracker taste, but far more sophisticated. The dough is very forgiving to work with, if it cracks, just push it back together. Once you have patted them into 6″ circles, they can remain in the refrigerator for a few days – so easy to assemble and bake right before serving.  This recipe makes four mini galettes.

cinnamon sugar for dusting the galettes before baking

2 teaspoons apple jelly to glaze the galettes after baking

hard to believe this will come together as a pie dough 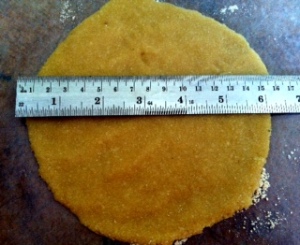 with just a small amount of coconut flour on your hands

3 thoughts on “Almond and Apple Galettes”